I've come down with a terrible case of the F-its at work today so....


Here's my wish list for races in 2012.  As you can see, I'm looking to get into the Ultra scene this year.  My family thinks I'm nuts but I'm really hoping my wife will be supportive as long as I don't try to go on a 6-8hr run every weekend.  That would be way too much to ask with a 6yr old and 2yr old running rampant around the house.  I'm sure I'll have to pare this down a bit.  Hopefully I can add some other local 5K/10K stuff that we can run as a family.

3/31 32nd Annual Boston Tune-Up 15K - 9.3 miles, Upton, MA
This is the first race I ever did and it has a special place in my heart.  And it's 4min from my house. I may volunteer for this one instead of running as this is my local club.
4/15 Boston Marathon – Not running it but volunteering at a water station.


Somewhere in here will also be a Road Half marathon, I think.  My friend Amy will hopefully be healthy enough to try her first and I want to be there for the fun!

Back on December 4th, I did a monster faceplate during a lunch run.  The cause was toe meets railroad track.  In this case, I'm lucky I was wearing shoes as my Vivobarefoot Evo's absorbed the impact of the toe on steel.  My elbow and ribs did not fare so well.  The result was a fracture of the radial tip.  That's one of the bones in your forearm and the part I broke was near the elbow. Basically the left bone in the left most image below.
The doctor told me to take it easy on it and work on getting my range of motion back.  He did not splint it or even recommend immobilizing it.  Unfortunate, he also said no running.
Fast forward 2 weeks.
This is my X-ray from today.  The radial tip has not moved any further and I have essentially full range of motion. This mean I will not need surgery. Its not healed so I'm still not allow to do anything stupid or lift anything heavy. Try to explain that to my 2 year old daughter. I can start running again on 26 Dec and pretty much will be unrestricted in time for the Super Bowl. Yeah! 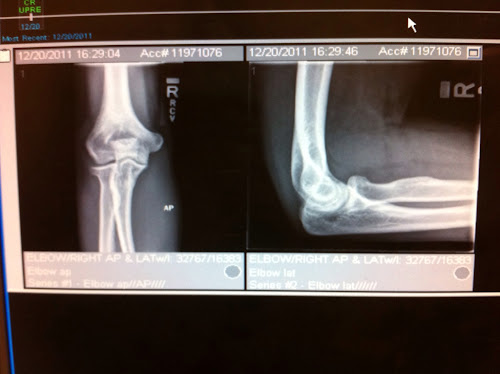 This post isn't really about anything in particular but I needed fodder to try out Blogsy for the iPad. It's not all that bad and without a doubt the best blogging app I've tried on the iPad. Thanks to barefootangiebee.com and all my other super blogger friends for the recommendations.
Cheers,
Durtyfeets
Posted by Durty Feets at 9:20 PM 1 comment:

Good take by Jason on local running stores. I would love to support my locals but they don't carry much that I can/would wear.