Back in the saddle

It's been a while since I have posted. Between vacation, the heat, and the teething toddler; blogging energy has been in short supply.

Over vacation I was contacted by a college friend who recently started running via Couch to 5K. He's trying to up his miles and has been experiencing knee pain. He asked me for pointers on natural running gait and even tried some barefooting.

I was happy to help. It also crystalized the need for me to write a few posts on my good form tips. I've been obsessively reading great instruction websites for over a year now and I've synthesized something that works pretty well for me.

I'm not a coach or a superhero or an ultramarathoner (someday) or primal. I'm just a regular 40 year old dude who has been happily barefoot and minimal running for a year.

Over the next couple of weeks, I'll be posting some quickie tips and tricks that have helped and continue to help me while a learn to run naturally.

Posted by Durty Feets at 9:00 PM No comments:

Invisible Shoe recently introduced their FeelTrue™ outsole.  I'm pretty excited about this as they are using what appears to be a molded outsole.  This outsole has the tiniest amount of toe spring.  For those not hip to minimal shoe jive, toe spring means the toes curve upward.  Most minimal shoe folks will cringe at toe spring as extreme toe spring interrupts the barefoot feel.  In this case, the tiny toe spring is barely noticeable and seems to perfectly address the user need of big footed-long toed dudes like myself.  To accommodate my finger like toes, my current huaraches are so long in front of the toe knot that they flop or fold over at inopportune times.

The tiny toe spring of the Feel True outsole will add what I'm hoping is just enough stiffness to keep the sole close to my toes.

As has been noted by Maple Grove Barefoot Guy in his Invisible Shoe review, Steven and Lena at Invisible Shoe are the model of prompt and polite customer service.  Within 20 minutes of placing my order, I got a personalized note from Lena saying that my shoes had shipped.  Awesome!  It has so far been a true pleasure to do business with Steven and Lena.

I ordered the 6mm Contact Huarache Kit  for my aforementioned finger length toes. 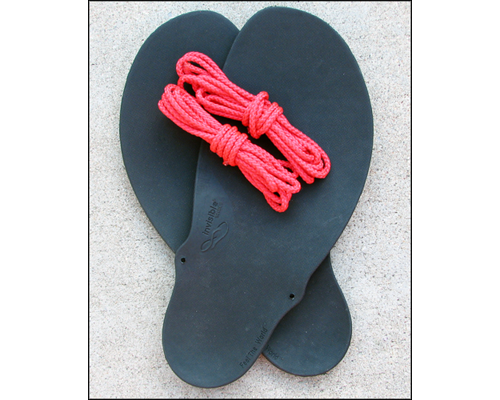 The 6mm choice was based on Steven's recommendation in the Feel True intro video on the site.

I really love running barefoot. The sensation of your bare feet on cool pavement is awesome.

Cool is the optimal word. At the moment, it is friggin hot around here. It has been approaching 90 deg for each of my lunch runs this week. The resulting asphalt temps make it waaaayyyy too hot for barefoot and the thought of shoes and socks is equally unappealing.

So I decided to give my "invisible shoe" style huaraches another go. I did some Internet research on tying methods and decided to try the "traditional" Tarahumara way.

This was 10x better than my former "slipon" tying experience. I still got a little hot spot in the tender area in the crook of my toe but I think I can remedy that with wider leather laces. And I was hot and tired so my form was crap. I'm also not sold on how floppy my sandals are. I'm thinking of getting a thrift store leather coat or skirt and gluing on a top sheet.

I should probably just bite the bullet and get some Luna Sandals from Barefoot Ted but I will experiment a little first. Besides, my Evo IIs just arrived and if I order more shoes, I will have a fork embedded in my skull.

I think I can learn to love Huaraches and I'm willing to try and make my relationship work.

Posted by Durty Feets at 8:09 PM No comments:

Faith in the American People

My dad will occasionally forward chain emails.  They are never offensive, to me anyway, and many are quite inspirational.  Quite a few are patriotic and show support for our troops.

A recent email that he sent triggered a familiar response from me.  It is a fairly standard email that portrays our troops and citizens in a great light.


Will you give this to my Daddy?

As a Company, Southwest Airlines is going to support 'Red Fridays.'

Last week I was in Atlanta , Georgia attending a conference. While I was in the airport, returning home, I heard several people behind me beginning to clap and cheer. I immediately turned around and witnessed One of the greatest acts of patriotism I have ever seen.

Moving thru the terminal was a group of soldiers in their camos. As they began heading to their gate, everyone (well almost everyone) was abruptly to their feet with their hands waving and cheering.

When I saw the soldiers, probably 30-40 of them, being applauded and Cheered for, it hit me.. I'm not alone. I'm not the only red-blooded American who still loves this country and supports our troops and their families.

Of course I immediately stopped and began clapping for these young unsung heroes who are putting their lives on the line everyday for us so we can go to school, work and home without fear or reprisal.

Just when I thought I could not be more proud of my country or of our Service men and women, a young girl, not more than 6 or 7 years old ran up to one of the male soldiers. He kneeled down and said 'hi..'

The little girl then asked him if he would give something to her daddy for her...

The young soldier, who didn't look any older than maybe 22 himself, said he would try and what did she want to give to her daddy. Then suddenly the little girl grabbed the neck of this soldier, gave him the biggest hug she could muster and then kissed him on the cheek.

When this temporarily single mom was done explaining her situation, all of the soldiers huddled together for a brief second... Then one of the other servicemen pulled out a military-looking walkie-talkie. They started playing with the device and talking back and forth on it..

After about 10-15 seconds of this, the young soldier walked back over to Courtney, bent down and said this to her, 'I spoke to your daddy and he told me to give this to you.' He then hugged this little girl that he had just met and gave her a kiss on the cheek. He finished by saying 'your daddy told me to tell you that he loves you more than anything and he is coming home very soon.'

The mom at this point was crying almost uncontrollably and as the young soldier stood to his feet, he saluted Courtney and her mom. I was standing no more than 6 feet away from this entire event.

As the soldiers began to leave, heading towards their gate, people resumed their applause. As I stood there applauding and looked around, there were very few dry eyes, including my own. That young soldier in one last act of selflessness turned around and blew a kiss to Courtney with a tear rolling down his cheek.

We need to remember everyday all of our soldiers and their families and thank God for them and their sacrifices. At the end of the day, it's good to be an American.

RED FRIDAYS ----- Very soon, you will see a great many people wearing red every Friday. The reason? Americans who support our troops used to be called the 'silent majority'. We are no longer silent, and are voicing our love for God, country and home in record breaking numbers.

Our idea of showing solidarity and support for our troops with dignity and respect starts this Friday - and continues each and every Friday until the troops all come home, sending a deafening message that.. Every red-blooded American who supports our men and women afar will wear something red.

By word of mouth, press, TV -- let's make the United States on every Friday a sea of red much like a homecoming football game in the bleachers.

If every one of us who loves this country will share this with acquaintances, co-workers, friends, and family. It will not be long before the USA is covered in RED.

The first thing a soldier says when asked 'What can we do to make things better for you?' is......We need your support and your prayers.

Let's get the word out and lead with class and dignity, by example.

The emotional side of me connects immediately with this email and I tear up.

Unfortunately, I am also a cynic.  My cynical side reads this and thinks it is a made up story that someone is using to, at best, drum up support for the troops or at worst, the original author is just an egomaniac trying to see how many people will wear red on Fridays.

Truth be told, I hate this cynical me.  I'm literally ashamed of these cynical thoughts this when I read emails like this.

This weekend, my family and I got to watch the oldest 4th of July Parade in the country in Bristol, RI.  Thanks Mom and Dad!

One of the parade divisions was for active military.  Each branch was represented.  While the branches passed, many of the spectators were standing and applauding loudly.  Everyone from our group was standing.  It was truly a wonderful site.

Other divisions had veterans groups and police and fire.  The crowd cheered for these divisions as well.
People even cheered for the sailors who were walking back down the parade route to get back to their ship.

Posted by Durty Feets at 9:50 PM No comments:

Barefoot Angie Bee: Somnio Nada Review and GIVEAWAY!: " Before the Nada's graced my life I had overlooked Somnio since it catered to those who wanted a padded, cushioned, stabilizing running sho..."
Posted by Durty Feets at 3:02 PM No comments:

Typing before you today is one happy dad. My son is almost 6 years old and I have been trying to encourage him to go barefoot as much as possible.

Last night, as I was unpacking the car barefoot, M asked me if he could come along barefoot too. Part of the parking lot is gravel so I prepped him that it might feel a little pokey but if he was careful and walked softly, he wouldn't get hurt. He thought it was great.

This morning, asked me if we could go for a barefoot run in the parking lot. I was very happy to oblige.

M and I ran around the smooth asphalt barefoot for about 10minutes or so. M kept commenting about how nice the pavement felt and that it felt cooler than he expected.

HE GETS IT! He had a blast.

I watched him run back and forth a few times envious of how effortless and perfect his barefoot form was.

What great way to start a beautiful day.