My family and I arrived in Freeport, ME on Friday night for a weekend of running. My two kids are 6 and 2 and both love to run. My wife wants to love to run and really tries to like it because she loves me. My college buddy Jabbar had come up from Virginia to run with me in the 50K ultra. It would be a first for both of us.

Saturday was really hot and humid at Pineland for the shorter distance races. We got there early and went to say Hi to Jason and Shelly Robillard who were in town to run and help out Merrell. The races Saturday were a 5K, Barefoot 5K, 10K and the 5K Canicross where you run 3.1 miles attached to your dog. The Canicross is absolutely hysterical and chaos ensues immediately. Apparently, dogs too have nervous bladders during races. 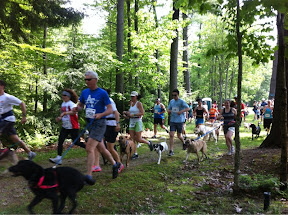 My wife and 6 yr old son ran the 5K which started at 11AM. I'm very proud of them both as this was their first trail race. 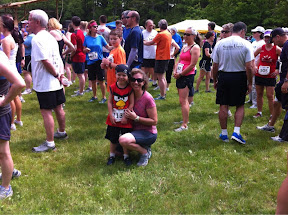 My daughter and I were doing the barefoot 5K that started at 11:10. My daughter is 2 so she rode in the jog stroller. 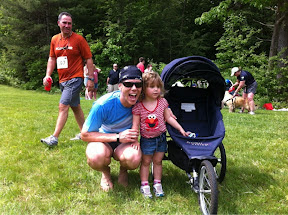 Our plan was to run our races and I would catch up to Pam and M at some point and run in out with them. The barefoot 5K was listed as a premier barefoot event in Runners World and it didn't disappoint. The course is fairly barefoot friendly and whatever barefoot hazards are there are easy to spot. Unless you are pushing a jog stroller. The addition of the jog stroller amped up the difficulty considerably. The uphills were not runnable due to footing. The downhills were killer because I had to brake the stroller. The stroller also hampered my ability to see the hazards to some extent. All that said, it was a blast and I'd do it again in a heartbeat. 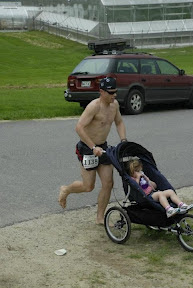 We ended up finding M and Pam at the aid station but A and I continued since she was getting a bit antsy. Somewhere along the way, she fell asleep and slept through our 36:30 finish which is pretty good considering the difficulty added by the stroller. This barefoot experience just adds to my esteem for my friend Adam who ran the 50K barefoot in less than 6 hours the next day. He is badass. But I digress, Pam and M crossed the line looking strong shortly after us. 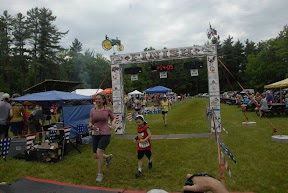 We stuck around for beer and food and enjoyed the party that is Pineland. The Pineland grove (start finish area) is a giant old timey BBQ party. It is awesome. For an addicted runner such as myself, this place was like an opium den. Race Directors Erik and Ian put on one hell of a show. M even got to show all the grown ups his good running form during Jason Robillard's Bareform clinic. 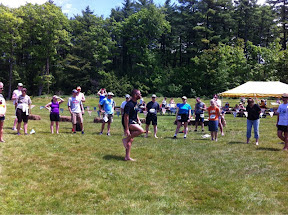 My wife was finally able to drag me out of there and we went back to the motel to clean up before venturing into Freeport with Jabbar for dinner and LLBean. 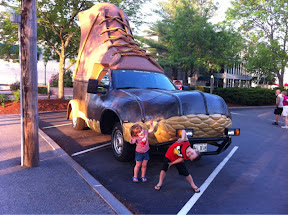 How else would LLBean celebrate their 90th anniversary but with a giant BootMobile.

Unfortunately, my wife developed a touch of food poisoning and spent most of the evening sick. I was concerned for her and called Jabbar to tell him it was likely I wouldn't be racing in the morning.


Since this is titled Part 1, I'm sure I've blown the cliffhanger aspect. Spoiler Alert: I got to run in the 50K

Stay tuned for the next exciting episode of Pineland Farms Trail Running Festival.